Since beginning the amateur radio hobby, I’ve been trying to make my vehicles radio friendly, and adding Power Pole electrical outlets has been part of it. I’ve added them to the Nissan and Ford cabs, but I hadn’t put them in the camper, until this afternoon. I’d been avoiding doing the addition because the new plug was much shorter than the Blue Sea Systems 12V cigar plugs I’d previously installed. Here’s a view (crummy cell phone pic, sorry): 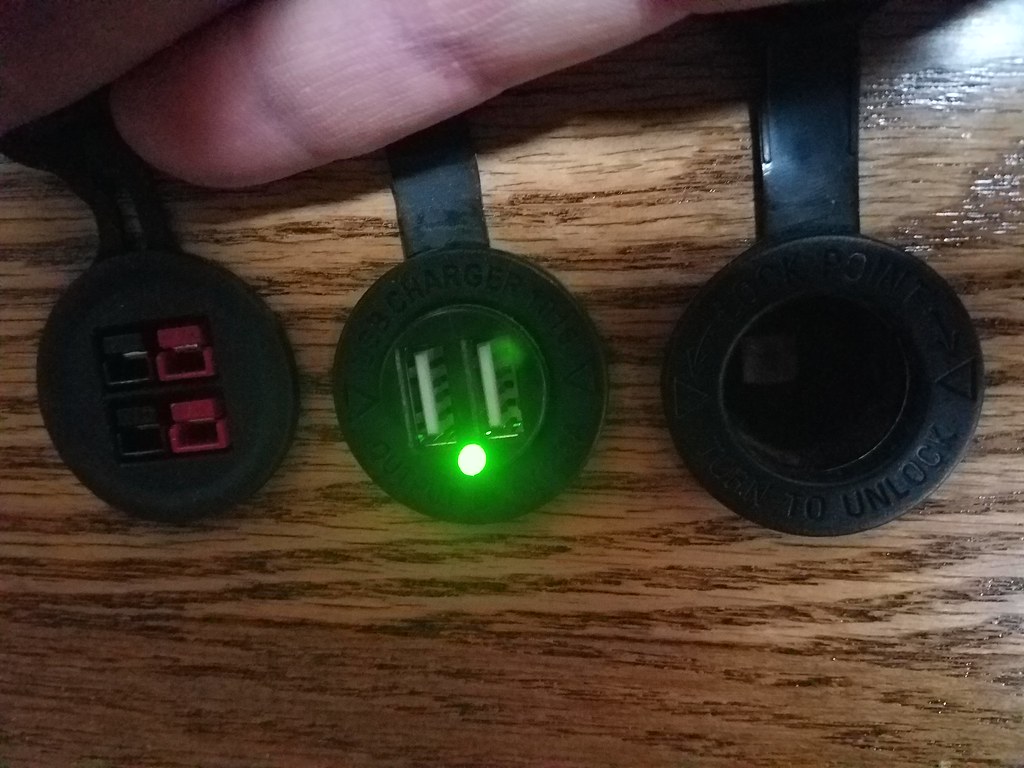 Here’s a view of the interior of the bed platform, showing the three plugs and their wiring. I had to counterbore the hole with a borrowed Forstner bit (thanks, Chuck) to get the plug (which is much shorter) to work. If you look carefully, you can see some heat shrink tubing that I’ll heat up tomorrow when I have a heat gun-it’ll keep the wires nice and tidy: 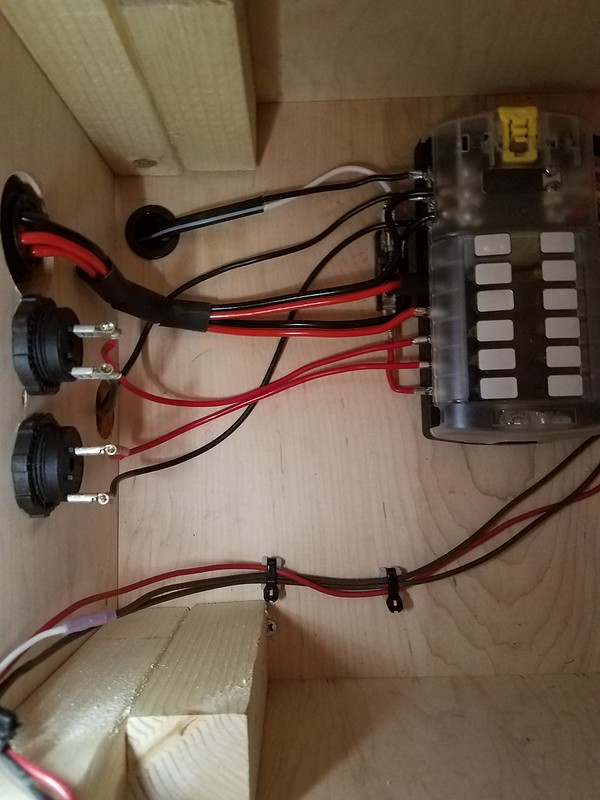 The wires at the top of the photo disappear into a hole that leads to a groove under the seat area- it goes to the Engel Fridge. You can just make out the glass fuse holder for the fridge- it’s not just a fuse, but a reverse polarity device.

Another view, with the Blue Sea Systems fuse box open: 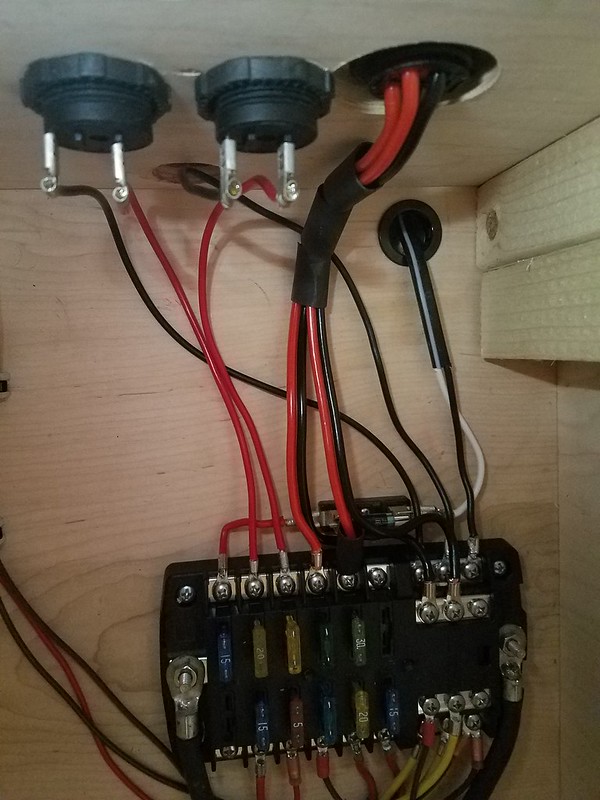 The two big black wires on each side of the fuse box are 4 gauge welding cable, and they get 12V from the camper battery in the truck’s engine bay.

I’m going to tidy up the wires to the USB and cigar outlets, maybe this weekend. If you’ll look closely, you can see that the counterbored hole is off center. It works, if it’s not my finest work.

The next view is the best shot of the whole box. If you look to the right, you’ll notice the two pieces of aluminum channel-I built a hinged board that drops into it, and sets on the two 2X2 supports on the left side of the pic.. The wiring runs beneath the board to the right, and supplies pixies to the furnace, water pump, bed lighting, USB and cigar plug in the bunk: 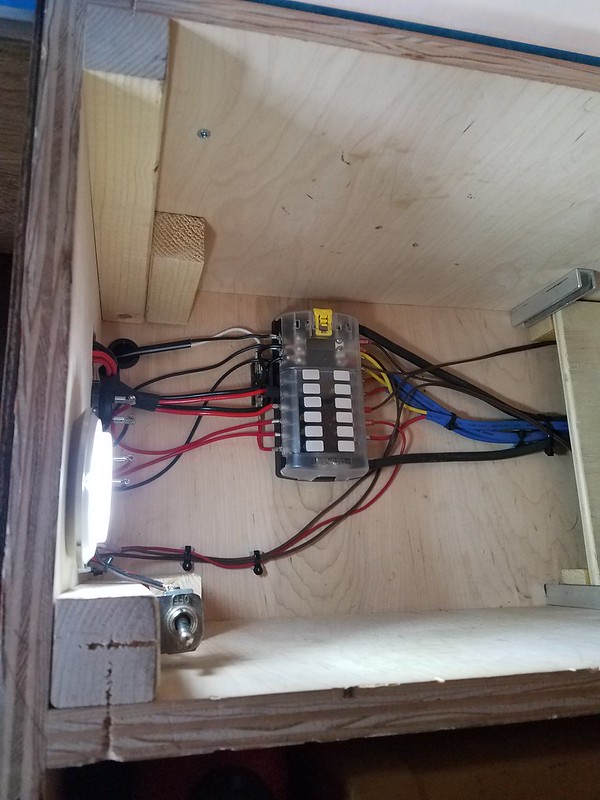 You can also see the switch and LED light that I installed “temporarily” five years ago. I found some much better LED lighting on ebay, and I’ll likely be installing it this summer.

I’m a fan of Power Pole connectors, and I recommend them to anyone who desires to upgrade their 12V system.

The Blue Sea Systems USB outlet is pretty wimpy, and won’t charge many different cell phones. That’s why I don’t like it much.

Power Pole connectors and accessories can be purchased many places, but I like Quicksilver Radio. Give them a try. (No affiliation).

This won’t be a pleasant post. Over the past few weeks we’ve lost three good people.

Will Grigg ran the Pro Libertate website, and I’ll admit that I havn’t been over there for a year or so. I didn’t stop following him because his blog (and podcast, for that matter) lacked for anything, rather it was that I was always so pissed off after reading it that I had to stop. His content was always excellent, and was a great resource for those interested in how “justice” gets meted out by corrupt officials. Will was doing great work right up until his death by heart attack at 54. He is sorely missed by his family, and his passion for justice was unmatched. Rest in peace, brother.

There is a GoFundMe for his family here. If you have a couple bucks and want to help them, please do.

Kevin O’Brien ran the Weapons Man blog and it was a daily stop for me. I received more about firearms of all kinds, their history, and their uses in each military service than I’d have been able to learn in a lifetime of reading books. Kevin also died from heart failure.

His blog is still up, and I urge you to stop by and peruse it, starting at the beginning. I believe you’ll be glad you did. Much more detail about his death and life celebration are there if you care to know.

Finally, Bob Owens took his own life, leaving a wife and two daughters, 9 and 17. I have no interest in moralizing about his choice. This is neither the time nor place, so please follow my lead.

My only interaction wit Bob was on Twitter, and I found him to be intelligent and witty. Bob ran the Bearing Arms website. He is also missed by his family, and I can only imagine that they are having a very hard time right now. Once again, if you have a little money and would like to contribute to his family’s immediate and college needs, you can head over to the GoFundMe set up in his name here. I’m sure it’ll be very much appreciated.

I’ve been personally mourning Will and Kevin’s death, and putting off this post, sorry. Now, with Bob’s death I had to get the move on. We’ve lost three excellent people, and I’m going to pray for the people who loved them. If you pray, I urge you to do so as well.

Go hug your friends and family.