For now, anyway. Read about it here.

I found Fireclean to be a serviceable lube, if expensive. After they sued Andrew Tuohy, though, I promised to never do business with them again. I’ll buy canola oil at the grocery store. I suggest you do the same.

From Claire Wolfe over at backwoods home magazine (you’re reading it, right?).

It’ll take you thee, maybe five minutes to read, and be encouraged.

By the way, if you’d like to contribute to her excellent blog, you can do so here.

From The View From North Central Idaho:

How many “gun nuts” would it take to overthrow, or at least completely remove the majority of those in control of, a small city government they thought was corrupt? Or a large city government? Or a state government?

Go ahead and read the whole thing. It might open your eyes.

Thanks to Joe for allowing me to reblog this.

Recently, I purchased a Powerpole Bag. It includes a Powerpole 150 piece terminal kit and a Tricrimp crimping tool. While I was at it, I bought a set of dies to go with it, as well as a small roll of 12g red/black zip cord.

The terminal kit contents are great, and unless you’re doing hundreds of Powerpole terminals a month, I’d recommend the smaller size.

Right off the bat, I saw a small problem- the box that the parts come in is pretty lousy quality. Every time I tried to dig out a terminal, the removable  divider walls would come out of their slots and allow the parts to mix. I dove the my local Mega Lo Mart of sporting goods and picked up a couple Plano Stowaway boxes, one for the terminals, and one for the crimper and dies: 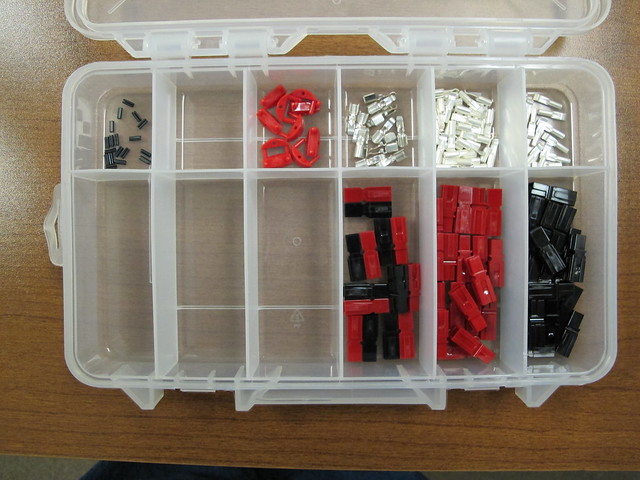 I threw the divider box that cam with the kit in the trash, where it belonged. I suggest you consider doing the same, if you buy the kit.

I put the dies in the other Stowaway box, and dug out my Pro’s Kits crimpers: 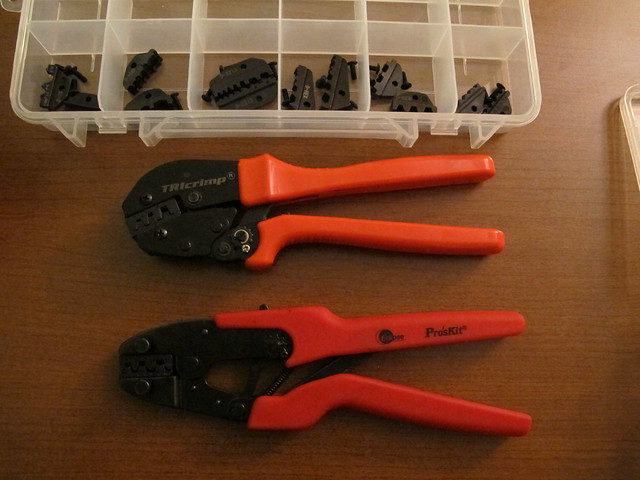 When I called customer service at Powerwerks.com last month, they told me that I’d need THEIR crimpers to properly crimp the terminal ends to the wire. That just isn’t true. My Pro’s Kits 902-337 open barrel crimper works perfectly, and the Pro’s Kits website calls it a Powerpole/open barrel crimper now. The Tricrimp dies fit my Pro’s Kits crimper as well, so it wasn’t a complete loss. If you own a different brand of open barrel crimper, I suggest you at least TRY it on these terminals before you purchase the Tricrimp. The worst you can do is ruin a terminal.

Both crimpers stack neatly in the box: 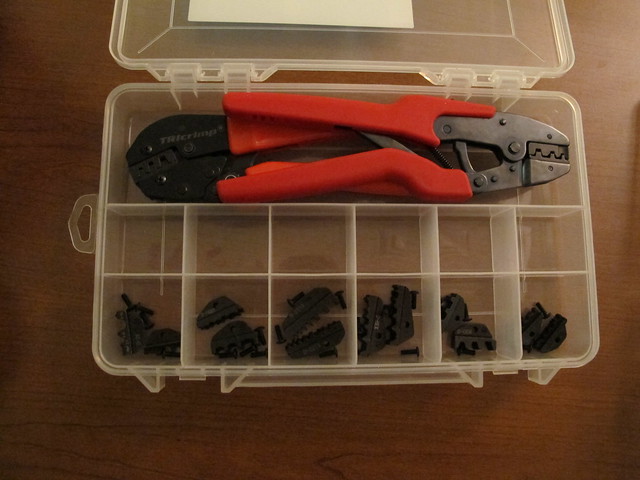 With room for extra dies.  Here’s a photo of the top of the box: 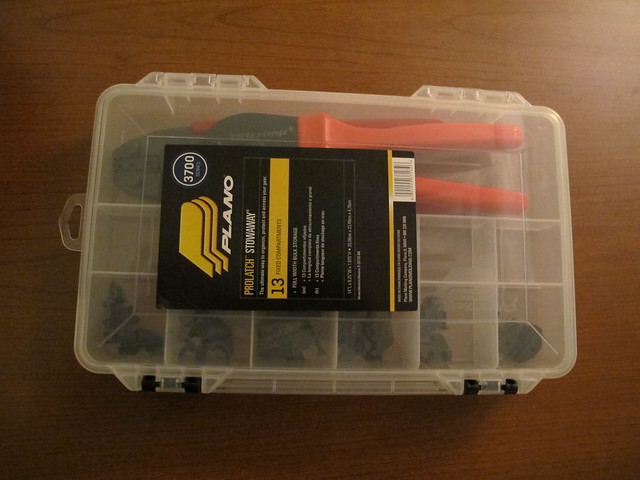 The bag is all right, but nothing special. I’d probably buy something else if I’d read a blog post like this one first, though. It’s not as sturdy as I’d like. 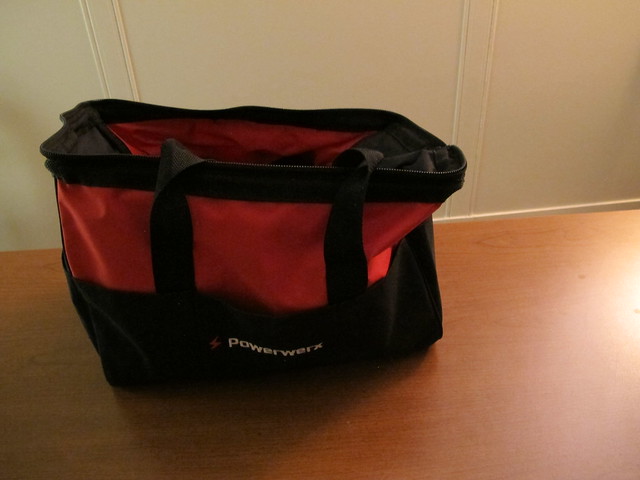 Everything stows neatly in the bag: 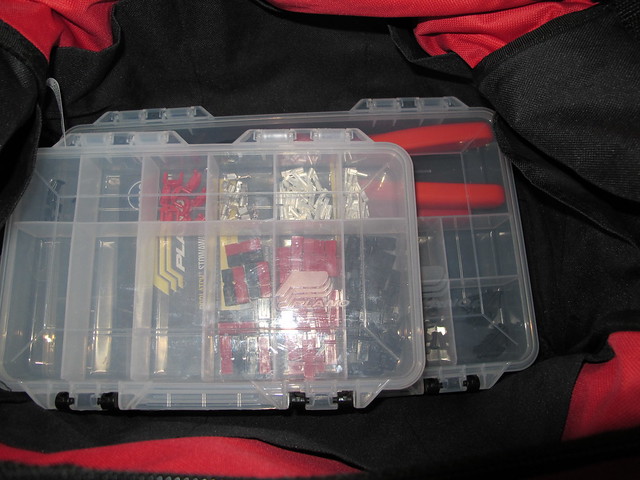 The Tricrimp is a bit different from mine in that it has a little attachment on it, presumably to help you hold the terminal end: 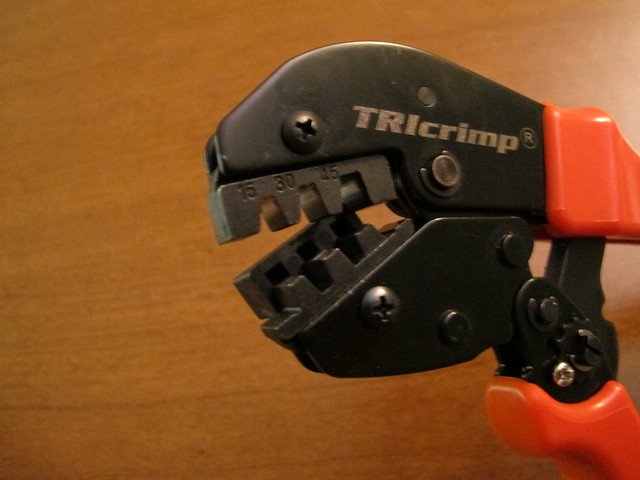 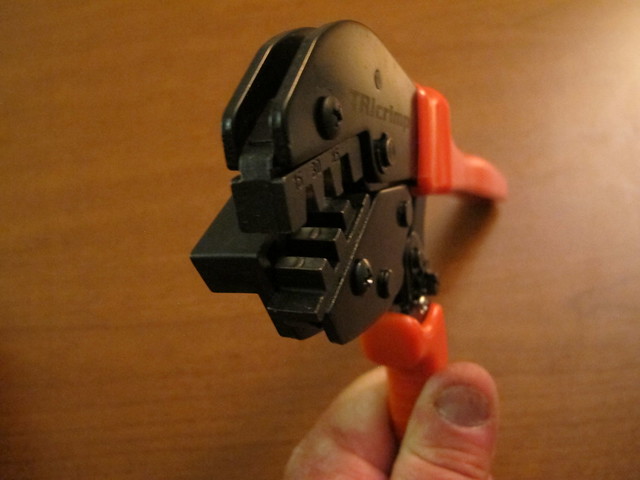 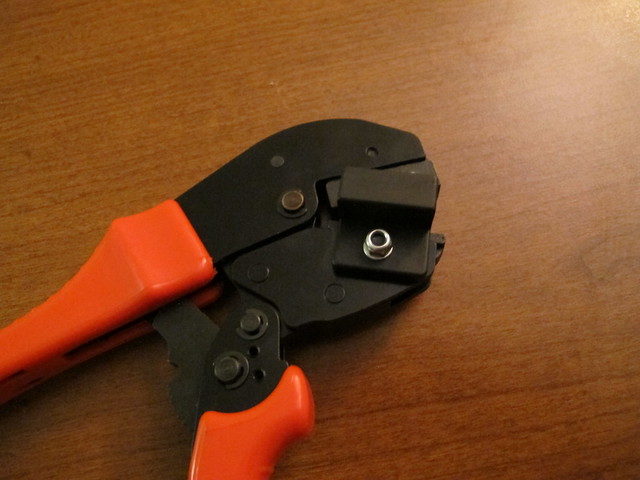 I don’t find it the least bit necessary, and in fact a bit of a hindrance for the 15A and 30Ag wire slots. Maybe it will prove to be useful for the 45A slot. I’ll let you know when I try assembling 45A terminals.

The bottom line is that while Powerpoles have become the standard for ham radio power termination, some of the accessories leave a bit to be desired, at least for me. Seems like lots of ChiCom stuff is used, which gives me pause about the Powerpoles themselves. Time will tell. YMMV.

Edited to add: Powerwerx also offers a tool for disassembling terminals, but it’s a lot of money for what you get. A very thin screwdriver or a penknife works just as well.