I’ve decided on a Yaesu FT 857D for my first radio (I’ve previously purchased a Yaesu FT 401, along with its matching speaker, VFO, and microphone, but that’s another story).

Evidently, every ham in the country has as well, because there aren’t any available in the US of A at the moment. I’ve called no less than ten distributors, and the’re ALL out. Between the first full week of April and Wednesday, the remaining stock sold out, everywhere. This is the place I’d like to use bad words, but won’t.

Seems that one of the knobs on the radio is manufactured for Yaesu by another company, and they’ve gone belly up. No knobs, no complete radios.

So I’ve given my name to Main Trading Co. in Paris, TX., and they’ll call me when they’re in.

And when/if I get one, I’ll let you know.

In an earlier post, I whinged that the ARRL had bolliched up my license by giving me credit for a General class license rather than a Technician class license.

Last night, I received an email from the FCC and it’s fixed. I was pleasantly surprised that it so easy (for me, at least).

Next I’ll add to the confusion and request a vanity call sign.

I take this day each year to post about the Appleseed Project. I attended my first weekend event in June 2013, and at the end of day two my score had risen from 174 to 194.

My second event was over Labor Day weekend of the same year. My final score was 209. 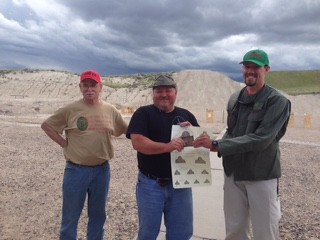 The principles taught at an Appleseed event translate to skills that will make you a better shooter.  Interspersed throughout the class are short intermissions, and the instructors teach about the events of 19 April, 1775, and it’s not the boring history from your seventh grade history class. It’s full of people’s stories, what happened when, how, and why. If you only go for the history, it’s well worth the price.

There almost certainly an Appleseed event within driving distance of your home. I urge you to sign up for an event and take your family.

Is this fact, or not? In any event, I suggest you have a month’s cash on hand…

I’ve been continuing to rewire the headlights, and over the past couple days (Monday and Tuesday) I connected the relays to ground and positive, and ran the headlight wiring through the radiator support. I also built another ground wire to connect from the battery to the Blue Sea power post which will be a terminal connection for grounding this project, as well as others in the future.

The next thing to do is to splice the left and right headlight harnesses together and connect them to the relays, and connect the trigger wire (I’m using the original headlight wires for this) to the exciter terminals on the relay, and I’ll be done.

Trouble is that we’re supposed to get some rain turning to snow on Friday, and more snow over the weekend. I’d get a lot more done if the weather would cooperate.

Pictures and possibly a video next time I work on it.

As some will know, I took a local college class to study for my ham license, took lots of practice tests online, and passed the test for my technician license on 19 March, 2016.

After waiting the requisite 15 days, then four more, I received an email from the FCC that I had indeed been granted a license. Unfortunately, it was for a general, not a technician, license.

I called the VE (voluntary examiner) who conducted the class, and he’s going to make some calls in order to get it straightened out.

For those of you who follow the old adage of “the grass isn’t always greener on the other side”, I present to you some insight for consideration.

Green grass takes tending.  It takes care.  The best yards that you see in your neighborhood are the ones where the people who live there take pride in ensuring the grass which they lay claim to is the most pristine.  You have to take care of your grass.  You have to put in the hard work.  You have to want your grass to be first-rate.

From the Arctic Spectre

I’ve been browsing this site for a little while, and it’s excellent. LOTS of info, prepare to be inundated…

And now I’m going outside to scare off the flicker that’s been trying to drill a hole in my rain gutter for the past hour. At first, I thought someone was using an impact screwdriver…

It probably goes without saying…

I attended the Riverton class over the weekend. The next class is 6/7 August 2016 in Dubois, Wyoming. I urge you to attend: I’m a noob in terms of radio communications, and I learned a lot. I’ll be going to the August class, so long as I’m not prevented from doing so. This class is appropriate for noob through expert level-if you don’t learn something, you may not be paying attention.

The class followed the agenda (see the link above) pretty closely. I won’t go over it in detail, but I’ll answer questions in the comments.

The most important things I got from the class was that I need to add to my library, and that I need to be listening much more than I intend to talk.

During the first day, we were asked to go outside and listen to several frequency ranges, and try to identify the traffic therein. I found it very instructive, as I had set up my software defined radio, and I had a difficult time obtaining a decent signal. I assume that I need a better antenna. I’m using a mac, so I’m using a nooelec dongle. If you have a pc, use the link above.

A local vendor was in attendance, and was very helpful in helping to solve radio and antenna issues. I’m advised that he will attend the Dubois class.

In the afternoon of the second day, everyone with equipment were asked to set up their equipment and transmit. Never having been around an amateur radio field day, I was able to see several different setups, from fancy schmancy store bought stuff to very inexpensive homebuilt stuff, and lots in between. I have a much better idea of what I’ll need now.

Please make every attempt to get to the Dubois class- the information is well worth the $100 asking price.