I cobbled the wiring back together (it’s not really that bad-all joints are soldered, it’s just ugly) for a quick ride today. 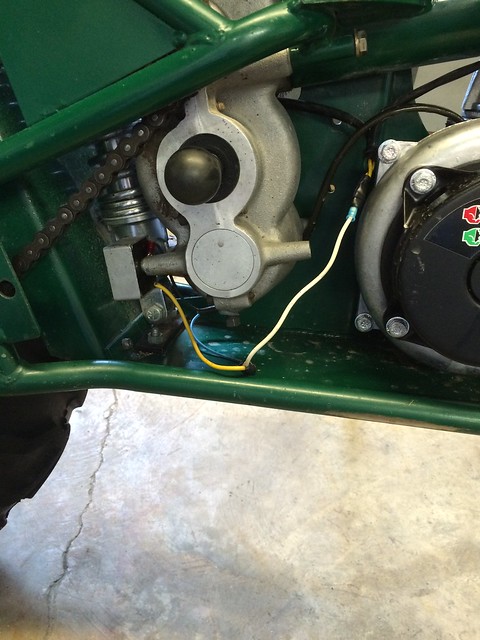 I changed the air filter, readjusted the carburetor, and positively FLOGGED the bike around the block twice today-lots of full throttle, lots of off throttle, and a nice cool down afterwards.  I’ll do it a couple more times and call the run in complete.

I’ve also found the kill switch I was looking for-it’s a Magura style switch, just like what came with the bike. The Achilles heel of this switch is that the rubber self destructs after a couple years. So I bought 2. 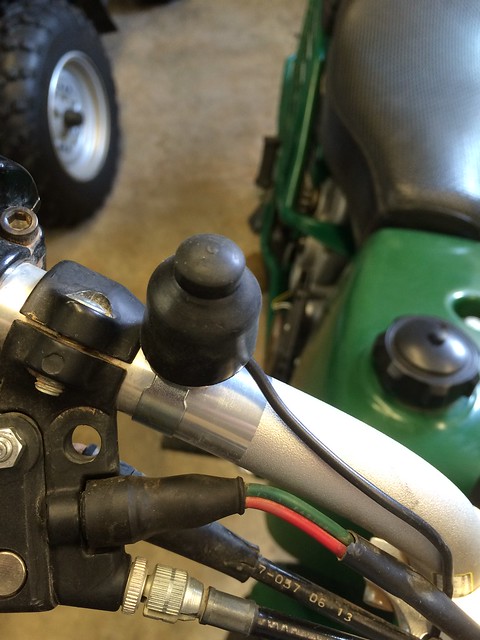 If anyone knows where to purchase these brake switches, I’d appreciate knowing about it.

The project over the weekend is to install a Blue Sea Systems power post, install the wires to it, and rewire the bike’s electrical distribution. The new engine came with a “floating ground” magneto with two wires: 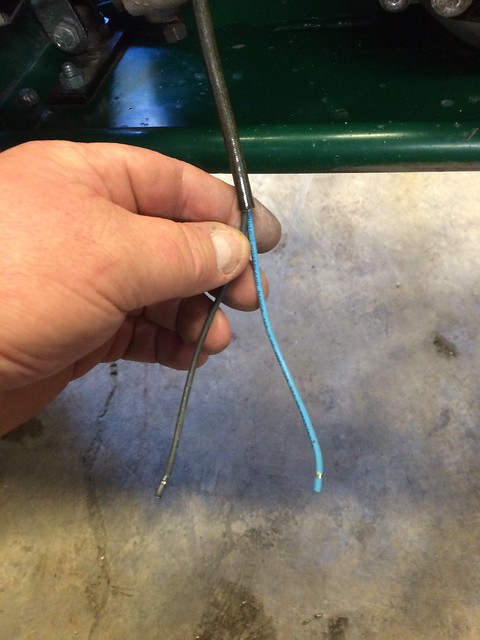 So I’ll need to ground the black wire and connect the blue one to the voltage regulator and the lighting. Since I’m always tinkering, the temptation is to install a rectifier and battery so I can have a proper horn and the ability to charge other stuff, but this is a rokon-no need for overkill. Nevertheless, upgrading the stock system won’t hurt.

The clutch nut arrived Wednesday night, and I installed it on Thursday after work. 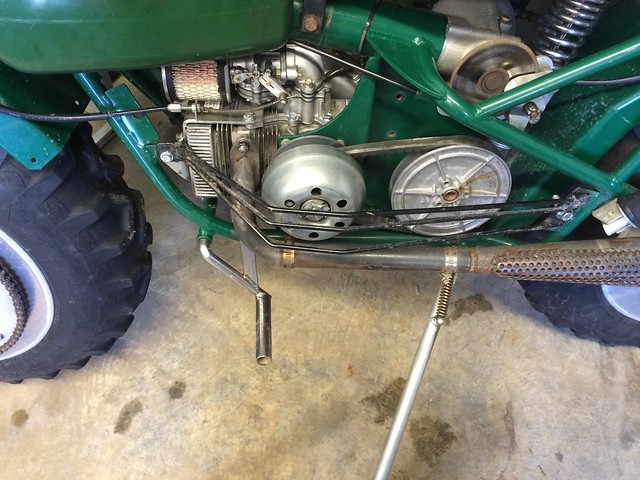 The Exhaust studs  and kill switch arrived on Thursday night, and I installed the exhaust system, kill switch, and clutch guard after work Friday. When I got home, the fuel tubing was in the mailbox so on Saturday evening I installed it, fueled the bike, and started it. It took quite a lot of pulls to get the engine started, as the carburetor was bone dry, and I hadn’t thought to prime the engine. Well, sometimes I’m brilliant…

It fired up, and ran pretty high, so I adjusted the idle screw and idle needle, and rode it around the parking lot, shut it off to let it cool, took it for another short ride, and let it cool again.

Sunday I took it for a longer ride (after flooding the hell out of it) and did the same thing today at lunch. This afternoon after work I retorqued the clutch nut and staked the retaining washer. I’ve mixed a gallon of fuel with 88 octane and Amzoil Dominator at 24:1 for break in. I intend to run it around the block at work until the fuel gets low, then refuel it and lean out the high speed needle for best performance.

Now I’ve got to reconnect the electrical system.

It ought to be easy enough, although I’d like to upgrade the wiring from molex connectors to Weatherpack connectors. But that’s a project for later.

What to do with these Talenti gelato jars… 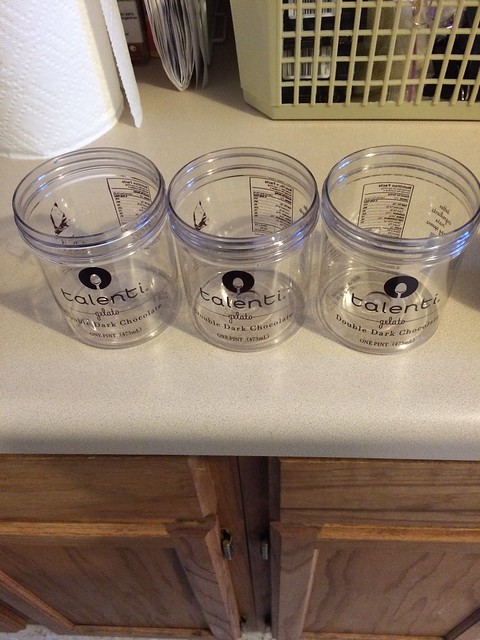 Fill ’em with your spare filters! 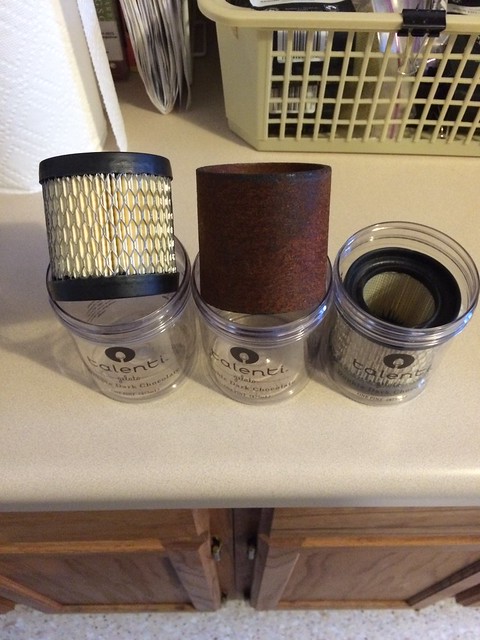 They fit well, and have nice tight fitting lids. I put a paper towel in the bottom of each one to take up the small space between the jar and the filters.

I found that these jars will hold up to mineral spirits-so if you have a oiled filter, you can drop it in the jar, fill partway with mineral spirits, screw on the lid, and shake.

The fan housing is on: I had to provide it a little room between the front engine mount and the top of the housing by hitting it with a hammer. It’s pretty soft metal, so that was pretty easy. pay no attention to that ugly, unpainted weld. 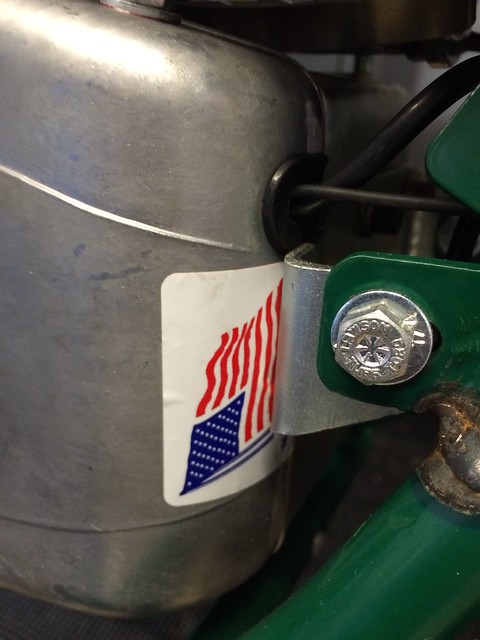 I’ve also removed nearly all the flanged bolts and replaced them with grade 8 hex head cap screws and flat washers. The flanged bolts are serrated, and they saw a little metal off the parts each time you install/remove them. The cylinder head shroud bolt holes are much larger than they used to be… 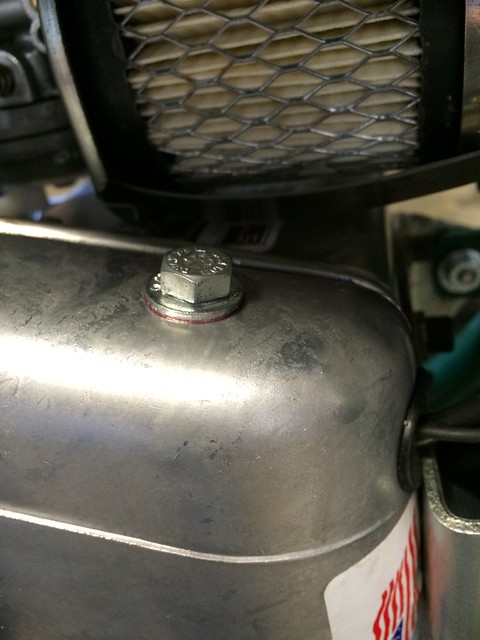 I’m waiting on the clutch bolt and a couple exhaust studs- I ordered a couple of them, but I wanted longer ones so I ordered a different length, and they ought to get here in a few days. I’ll also replace the starter assembly bolts and realign the starter at the same time. This engine has a LOT more compression, so having the starter work right will be important. Istallation is pretty easy, although I drilled a 31/32″ hole in the end of it so that it’ll slip over the boss of the starter housing. 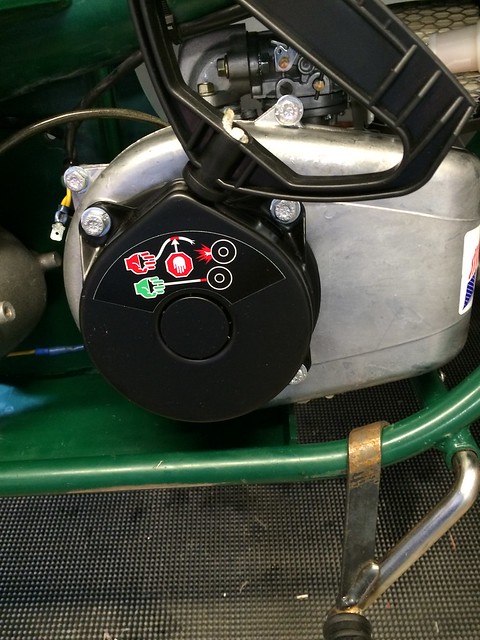 I bought the mitten grip starter handle (along with a small pile of other stuff) from Dave Fillman at fillmanmachining.com. If you have a Rokon, and you’re not buying some of your parts from him, you’re missing out. He’s easily the nicest guy I’ve ever talked Rokons with on the phone, and he carried a small selection of parts for Rokons.

And don’t forget Rokon International. Tom Blaise keeps the door open and seems to have every part for these bikes memorized.

I bought the mitten grip starter handle because I’ve had the engine on the old bike pull the starter right through my fingers, and it HURTS (waaahhh…). The bigger handle mitigates that risk a bit.

I’m putting off the wiring until I can come up with an elegant (on a Rokon?) way to do it. I may even rewire the bike, eventually.