I camped on Muddy Mountain again this weekend (last weekend, too) intending to ride the Rokon out to Pitchpine canyon and follow a road to an old sawmill.

Despite my efforts to find it, I’d evidentially ridden right by it. I didn’t take my map, so I had no reference but a buddy’s description. It wasn’t enough. I’ve found it on Google Earth, as well as the map, so I’m going to try to find it next weekend, which is Labor Day weekend. I’ll even take a map.

Any excuse to go camping.

Regarding my trip last weekend, I camped in the same spot as this weekend, but the temperature when I awoke on Saturday morning was 27° F and I was playing the part of a sissy that day. In addition, the regulator on the propane bottle failed (diaphragm split), so I repaired it with a spare. I wasn’t exactly itching to ride the bike.

Let’s shut up and get working…OK?

I drove up to Muddy Mountain this weekend and rode the Rokon out to a cabin on the south side of the mountain to get some photos of this old cabin: 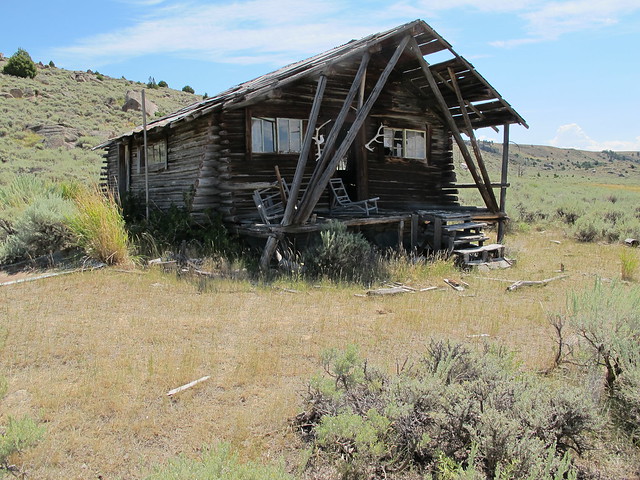 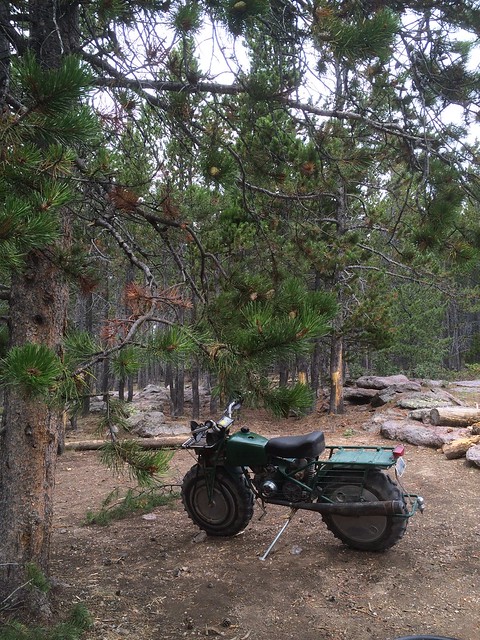 It seems to me that the Rokon is a motorcycle conceived, designed, and built by Wile E. Coyote, Super Genius. It sure as sugar wouldn’t catch the roadrunner.

It was a long ride, but really fun. I’d found the cabin many years ago while driving the two track in my pickup, and regretted not stopping ever since. I’m glad I took the time to finally go back. I’m hoping to return this weekend to check out an old sawmill near it. If I do, I’ll keep y’all posted.

If you want to make fermented pickles, this post will help you do it. I followed this recipe a few weeks ago with great success

Jars– I use 1 1/2 pint, quart, and 1/2 gallon mason jars. You’ll have to figure out what size you prefer, but I suggest you use at least pint jars with large mouths. You can even use gallon jars, if you have them. Large mouth jars will accept 4 oz. jam jars, which are excellent to use as weights to keep the cucumbers below the brine surface. But Ziplock bags work perfectly well.

Ziplock plastic bags– or 4 oz jelly jars if you’re using wide mouth jars to pickle in- to keep the cucumbers submerged in the brine so they don’t mold. Moldy pickles turn to mush, and suck.

Airlock– Once again, you can get these at a brew store as I did, or order them online.  You don’t need expensive ones.

A 5/8″ hole saw– to cut the holes in the lids to accept the grommets. I bought one for less than $10 at a local home improvement store.

Jar rings– use old ones, because the brine will make them rust.

Cucumbers– I get mine from a local fruit truck, but farmer’s markets and small farms are a great source as well.

Garlic cloves, peeled. The more the better, in my opinion.

Pickling spice (if you want)

Reverse osmosis water– you don’t want chlorine in it.

Get your Tattler lids out and use the hole saw to cut a hole in each tattler lid, then install the grommet. it’s pretty easy. Make sure there aren’t any plastic shavings on them- I washed mine in the sink to get rid of the cuttings.

Put a head of dill, mustard seed, peppercorns, crushed red pepper, clove of garlic, and pickling spice in each jar. I used about a tablespoon of each, or thereabouts. I didn’t use pickling spice in every jar, either. But I kept track of which jars I put it in so I can tell if I like it better.

Prepare the cucumbers by scrubbing each one with a brush, and scrape the blossom off the end. As I scrubbed each one, I put it in a jar, arranging them as I went. Leave a couple inches of headspace in every jar: this allows you to use some sort of weight or spacer on top of the pickles so the pickles don’t mold and turn to mush. I figured this out the hard way, after ignoring the advice of others. I did ignore the advice of others and omitted oak, grape, and other leaves. My pickles turned out fine.

When the jars are full, prepare a brine with 1/2 Tbsp per cup of non-chlorinated water. I went to a local grocery store and bought a couple gallons of reverse osmosis water to ensure I wasn’t adding chlorine, which will kill the bugs you’re trying to grow. Fill each jar, leaving enough space for a ziplock bag with a small amount of water or brine in it to weigh the pickles down and keep them from poking out of the brine. If you’re using wide mouth jars, you can use a 4 oz. jelly jar for a weight, and it fits perfect in the mouth of the wide mouth. Fill the jelly jar with brine before you lower it into the jar

Put the gasket that comes with the Tattler lid on the lid, and cap the jar, screwing the bands down finger tight.

Fill your airlocks with water, and put them in the grommets. Store the jars at room temperature. Resist the temptation to open the jars- lacto bacillus fermentation is an anaerobic process, and oxygen will stop the fermentation.

Now you wait for three long, miserable weeks, smelling the pickles bubbling away without being able to eat them. I’ll confess that I opened a jar after 2 weeks, and it was fabulous.

Many thanks to Sally Fallon

I answered an ad on Craigslist for a 3 burner Coleman stove, which the seller (who was 250 miles away) said was new, and that he had lit it to ensure it worked. I received pictures, and decided to make the trip.

Turns out the stove was beautiful :

I’m glad I made the trip. It was hot-96 degrees and long, but worth it. I visited some friends in a nearby town while I was there.

My old Coleman 414 will be relegated to occasional and emergency use.

The fruit seller finally brought a case of cucumbers on Friday, and when I returned from my trip out of town (stay tuned) I put them into jars. Three weeks from now, I’ll have a bunch of lacto fermented pickles. And a full fridge.